icerabbit June 29, 2004 June 29, 2004Another day
Sync
Magazine, a new monthly magazine from Ziff Davis must be very eager
for people to sign up. After requesting a free trial number 2 months ago, I was
sent two bills weeks before I received an issue. 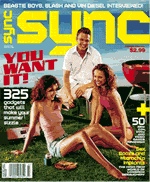 Odd. How can you judge something you haven’t seen yet? Oh, the first
issue wasn’t out till June 18.

I received their premiere issue and,
just as I thought, it’s very hip and flashy. Mostly gadgets, lots of highlights,
no depth. As instructed I returned the invoice marking it trial only. Two weeks
later, bill #3 is here. Guys, don’t push it!