As a pretty avid G4 Cube owner it might be sacrilege, but
honestly, since the Dual 1 GHz PowerMac G4 came out (which has been quite a
while) I’ve been wanting to upgrade to a faster PM. Many times I was torn
between choosing a Cube upgrade or saving for a new PM. I favored the slower
quiet Cube over a “windtunnel DP G4” which I didn’t think was are good value.
Enter the G5. Pretty sweet, but I didn’t want a first
production model. In the mean time the G5 has shown it’s merits and features
two
liquid cooled G5s running at 2.5GHz *. The fact that our credit card
offered double airmiles on “electronics & gizmos” meant it was time.

Last Saturday I called the nearby Apple Store
(only 3 hours away) at opening time and, lucky me, they had one in stock. I
actually was pretty nervous about picking it up. There’s no double checking
against DOA or defects before checkout. My faith was in quality control! A 20″
monitor & multifunction printer were added to the bill and after a long
drive we finally got home.

We
didn’t really do the entire unpacking thing, but C caught a few snaps. 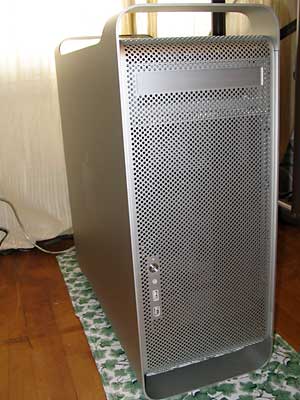 Zone fans & a giant radiator for the liquid cooled dual G5 processors!
Plus: not a single cable visible inside the machine! 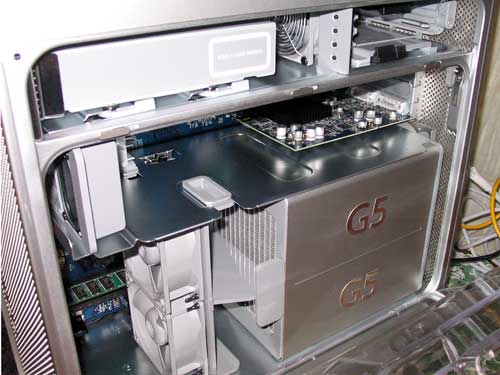 And,
this is now my desktop on a 20″ Alu Cinema widescreen display :) 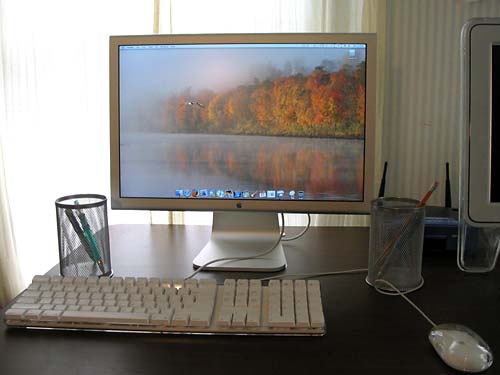 Needless
to say, I AM pretty psyched. I haven’t pushed the pedal to the metal yet, but in
day to day operations, it’s pretty spiffy (Xbench score 217). Well, it better be
for this amount of money! I am hoping OS X 10.4
Tiger will bring some 64 bit benefits, as I think there’s a little
headroom for improvement. 64bit code should be quicker than 32 bit code on a 64
bit machine, no? Launching iTunes with the visualizer was a bit of a downer,
seeing both CPUs run at 60+%? I thought it would run it with just 50% on one
CPU. At least the graphics were stunningly detailed & quick. All the rest
has been a breeze so far.

Noise? “Liquid ICE” has been very quiet.
There’s a brief spin up of the fans when you boot up. (along with a whir from
the superdrive). Ditto when both processors have been running a bit more
intensely. When I start processing some video they’ll likely kick into gear.
Right now it’s more a romantic vrrrm vrrrm like when you throttle a car engine,
which to me gives an indication of the horsepower under the hood ;)

Any downsides or criticism? (Beyond price) I know I’m repeating
myself on the mouse issue, but it’s really time Apple gets their act together
critter wise. It’s the new millennium. This thing should be wireless and have
two buttons + scroll wheel and come with any Mac sold today. Period. I dislike
the white keyboard & mouse with the Alu display & case, but it has
become less noticable. Standard memory for the top of the line model should be
beefed up to 1GB standard (instead of 512MB). In the same line I give credit to
Apple, as with several apps open simultaneously, I still haven’t used more than
342MB of RAM.

I’m not sure what hard drive is in here, but it scores
really low on Xbench. I also found it surprising that the 160GB (which is 148GB
after formatting) already has 8GB of data on it? How much space can OS X, the
iApps
& Office 2004 take? 2GB?

Other than
that, this is one sweet machine! :) BIG smile!

* Had Apple released / announced the dual 3 GHz past
summer, as they had planned, that’s what my purchase would have been, but if you
follow Apple news, you know IBM is having production problems above 2GHz. So,
Dual 2.5 GHz it is.