icerabbit January 11, 2005 January 11, 2005Another day
Don’t read this if you want to watch the keynote first later tonight. I
couldn’t help but follow along on MacCentral, MacRumors, MacMerc and
MacDailyNews.

Tiger is still on track to be released in the first
half of 2005. 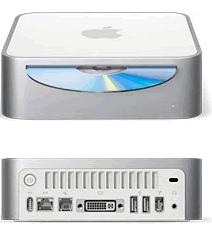 The Mac
mini. A G4 based “headless Mac” system priced at $499 & $599. It
only measures 6.5″ x 6.5″ x 2″, weighs in at 2.9 pounds and comes with a 1.25 or
1.42 GHz G4 CPU, 40 or 80 GB HDD, slot loading Combo Drive, 256 MB RAM and a 32
MB graphics card. The back features ports for power, ethernet, modem, DVI / VGA
(adaptrer), two USB 2 ports, 1 FireWire400 and a headphone out. Considering the
Mac Mini will in a few months be loaded with both iLife ’05 as well as the
upcoming OS X 10.4 Tiger, it’ll be a steal. I wonder what the upgrade
possibilities are in terms of a SuperDrive and more RAM. Are more models
upcoming? Or will we do the upgrades Cube style?
Edit: It seems there
are a few pricey Built To Order options in terms of RAM, AirPort Extreme,
BlueTooth & SuperDrive. The graphics card is (expectedly so)
integrated in the motherboard and thus non-upgradable, which may keep G4 Cube
owners sticking to their machines. 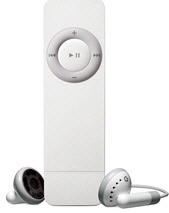 The iPod Shuffle. A featherweight 512MB ($99) or
1GB ($149) flash based music player is added to the iPod family. With 5 buttons
in the front (play pause, next, previous, +, -) and a slide button in the back
for off/on and the play mode: Normal or Shuffle; it couldn’t be any simpler.
With it’s light weight & neck strap this should be the ideal player for
workouts at the gym, jogs in the forest, etc. iTunes 4.7.1 adds support for
this new player, introducing the AutoFill option. The iPod Shuffle can also be
used as a classic thumb drive for file storage. A whole series of accessories is
already available.

Is world domination now guaranteed for the
iPods?
Will the software updates be a big hit?
Most certainly!