Home Another day M is back!

icerabbit March 8, 2005 March 8, 2005Another day
Last night our quiet house was suddenly disturbed by cat activity in the
basement. I wanted to check what they knocked over and saw Seven & Wizard
make a u-turn running back down the basement steps just as they spotted me
coming through the kitchen. I followed them downstairs and saw Seven was
carrying a mouse in her mouth. “Oh no, that might be M!” I thought. They ran
up to the back bedroom and into the bathroom. I grabbed a hold of Seven, who
reluctantly let go of the mouse. Twice releasing & recapturing it before I
could snatch the mouse to safety. The 3rd time the mouse found a way under a
drop cloth (DIY still in progress) causing Wizard & Seven to be
confused. The mouse, turned up at the other side of the cloth where I caught it
under the handy kitchen strainer. “It’s M!” I started a distraction by throwing
a pen into the bedroom …

Long story short: M is
back! 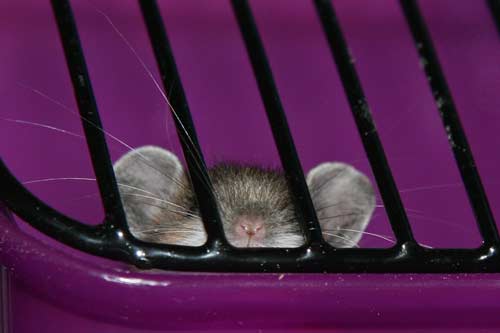 He
does have some injury on his right side from a cat claw or tooth, but he seems
to be doing ok. He loves his crackers, found his water tank and has active
moments. To keep him in confinement, we wrapped his condo in a T-shirt so he
can’t squeeze through wherever the opening between bars may just be a bit wider.

The only thing we haven’t figured out yet, is how to keep the cats
away. Right now we keep both french doors to our office closed. But, Seven knows
where he is. When I ran in to answer the phone without closing the door behind
me, she was on top of the cage in an instant …