It looks like our
second bathroom will be finished shortly. It’s been a very long process with
quite a few obstacles and interruptions (you may remember this started last
fall, before the hurricanes … ), but since earlier this week all major
fixtures are in place & operational. Woohoo! Now it’s down to some finishing
touches like grouting the shower, applying sealer, installing molding, hanging a
mirror, towel bars, etc. We can hardly wait ’till it’s finished. That bathroom
has certainly taken more time and effort than I generously anticipated, but then
there were some structural and technical adventures we didn’t know about. Oh
well, once it’s finished, the reward will be double. I’ll share some images
later this week once it’s near final. 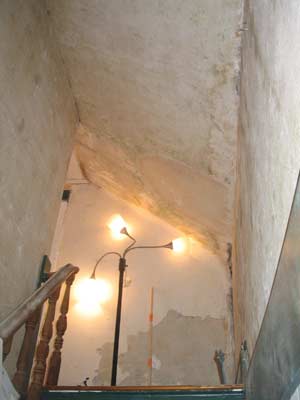 Plastering in progress on rear wall.

Last weekend we started
working on the walls and ceiling of the staircase and upper hallway. With all
the wallpaper removed and several gallons of plaster things start to look pretty
smooth. Was that ever a messy job. There was so much dust (from sanding) it
looked like it was like snowing inside. Just a few more little spots to hit here
and there and we can prime it :) We found some non-toxic paint stripper we’re
testing out. Because of the cold weather we can’t keep a door or a window open
for ventilation, but along with the resurfaced hallway we want to get rid of the
dark green trim paint. So, hopefully next weekend we’ll have a white hallway.

It’s been two days now Since M escaped. Wizard & Seven have left
their observation spots in the kitchen for their baskets. Either they think it’s
gone, or are too tired to stay on the lookout. I do miss the little critter. It
was so cute. M, where are you?