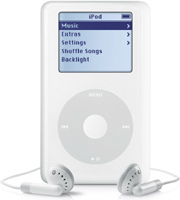 The
iPod’s missing features
#1 – Shuffle Playlist
Shuffle playlist (in
addition to Shuffle Album and Shuffle Songs) is a must have when you have
playlists spanning different albums and your iPod is loaded with different
genres. Right now it will play any song from anywhere on the iPod ~ Rock, New
Age, Holiday, Classical, Podcasts, … and sadly enough the iTrip beep files to
set up the FM frequencies.
[ In my opinion one should be able to set
the iTrip frequency under settings, where you scroll to the frequency you wish
to use, and not via a series of audio clips. Griffin?]

#2 –
OFF
The described turn off function is actually a low sleep mode that
drains the battery over a number of days – weeks. For those with less frequent
listening habits, there should be an option to turn the iPod OFF. Let stand by
be default for everybody, but make an OFF option available. I wouldn’t mind
waiting 30secs for it to boot when I’m on a trip, but, I do mind getting caught
twice on the same trip with a dead iPod. Can you imagine this would be your
digital camera’s behavior: you don’t use your digital camera for a week and it’s
battery went empty?

#3 – Notes
Note files are truncated after
4k? I honestly can’t understand why, when an iPod can handle 20 minutes of
music, equal to xx MB of buffered MP3s. When longer files are moved to the iPod
or played on the iPod it should leave them intact and if there is a technical
insurmountable obstacle, it should load the note in chunks, with read more links
to chunck #2, then chunk #3. Those would preferably be located at both the top
& bottom of the note with a previous & next link as well.

#4 – Games
I don’t know about you, but the games frustrate me.
I can’t play for 10, let alone 20, minutes without getting increasingly
frustrated. How about some entry level difficulty that gradually increases? It
should be entertaining and relaxing. Not raising my blood pressure.

#5 – Charging
Battery level / charge indication while the iPod
is being charged. The animated icon is nice, but it doesn’t tell you anything
more than it’s charging.

Also: installation can be tricky. If during
first installation you select manage music manually, your system / iTunes will
no longer find your iPod with no iPod can be found, or something of that nature.
You have to start with automatic mode and as the files are starting to upload,
quickly cancel it, and then change the preferences. Seems manual mode could use
some double-checking.

On my feature request list would be stereo FM
reception, so when you want to listen to the news or a certain radio show, you
can simply do so on your iPod. Thinking forward, all iPods should come with a
color screen and include recording capability without 3rd party hardware
(built-in mic and line in). Whether those are going to be realized by Apple is a
whole different matter.

PS: There seems to be an import bug in
iTunes. Upon inserting a CD that was previously imported, iTunes warns that the
files already exist and gives the option to replace the existing files or to “do
not import”. Clicking do not import results in the disc being imported anyhow
…