Home Another day Meet the gerbils

icerabbit December 19, 2005 December 19, 2005Another day
After the unfortunate incident with M&M (which passed away) * things
weren’t quite the same for the cats. They were bored beyond words. All they
would do is sleep, eat, drink, go to the bathroom, return to sleep … A very
high contrast with how they routinely patrol the house for mice, monitor certain
places in the house, try to sneak into the computer room to check on the mice
cage, etc. Seven & Wizard clearly know it has been virtually impossible for
mice to enter the house for a number of months, as they haven’t caught anything
for the longest time. The disadvantage of properly insulating this old house.

So, we decided to give them something to think about and made a trip
to the pet store.

Actually we made two trips. On the first trip we
got a white boy and a grey girl from separate cages. After 20 minutes together
they were not getting along any more. We were forced to keep them apart. The
next day, back in the store, it turns out “Frostie” was girl and so was the
smaller grey one. So, we traded they grey one in for a white sibling, and all is
well. 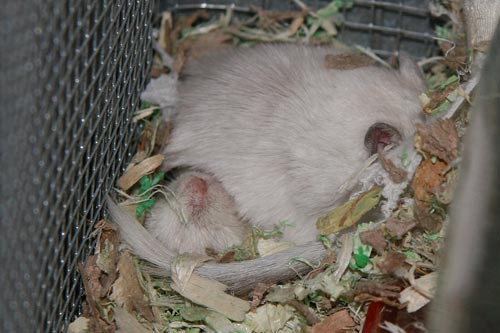 They
are actually a bit scared of the camera sounds (focus lock & shutter) and
the flash is like a lightning strike to them, so for now we just let them adopt
to their new home.

Of course they chose to nest outside the large
plastic pet residence with treadmill etc as well as the small wooden house. And
they love to chew! They go through the little cardboard roll from bathroom
tissue in less than two hours. It’s already clear I will have less cardboard to
recycle the conventional way (as in take it to the city recycling center of
course) Here you can see one working on part of a sheet of cardboard. Cardboard
tastes better then the gerbil size 2×6 in the background. 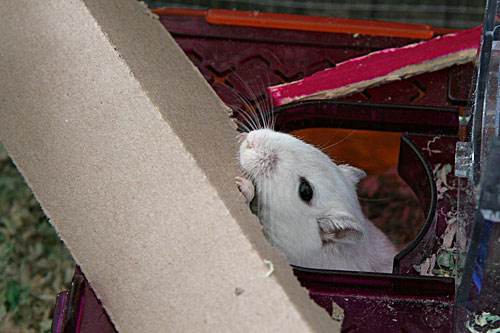 And
the cats? Only during their afternoon nap is when we don’t see them around.

* (during our trip to Florida M&M ate part of some branches
which I had placed in the cage for them to climb around on, and we believe
that’s how they met their end)