Here at icerabbit HQ we have been a little too busy recently to focus on testing the new Mac mini 2009 2.26GHz with other hard drives, after we upgraded the memory. Last night I finally gave the mini a nice place on my desk under the 20″ Cinema Display to which it is hooked up.

My original plan has been to use the Mac mini with a faster 3.5″ external hard drive, rather than upgrading the internal drive, which is rather tricky. If you like detailed instructions to perform such an upgrade, look no further than this iFixit guide.

Noting that I haven’t switched to the mini as my primary machine yet; so far, I have been very satisfied with the speed of its 2.5″ Fujitsu …. hard drive. The combination of this drive + the mini is more responsive than many macs with 5400 rpm drives I have seen over the years. So, I haven’t special ordered an anno 2009 zippier 3.5″ 7200rpm drive yet for the ministack. Right now it looks like I will use the ministack for secondary mass storage with a regular drive.

Even if I don’t find something faster than the internal drive in the house it will be a fun exercise to see how long it takes to back up the mac mini using USB2, FireWire400 and FireWire800. What external bench scores will be? Which will be the faster drive? Which applicaion will be faster? SuperDuper or CarbonCopyCloner? And what about temperatures? Does all this hard drive activity kick the fans in overdrive, or not? Click through for the findings.

I let OSX update do its thing and then did a disk repair. To my surprise that took a while. Four and half minutes to read the permissions database, followed by 1 minute to do the actual repair.  Hard drive info: 16.8GB used, 146000 folders and 546500 files (rounded) 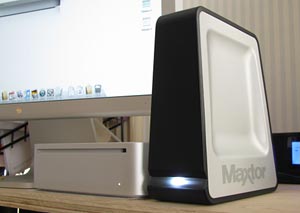 SuperDuper Backup – All Files via FireWire400 has the preparation done in 13 secs and then starts copying files. Effective copy speed varies greatly as well depending on the files being copied. 5GB done in 16 minutes. 10GB in 26 minutes. In all it takes 46min 28s to back up 16.8GB.

Conclusion: using SuperDuper, the 16+ GB backup did not show any significant difference between using USB & FW towards the Maxtor OneTouch4 drive. 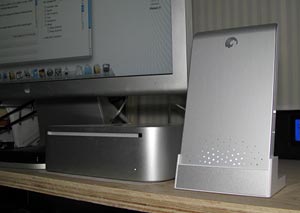 SuperDuper? I think we can safely assume it is going to be >45-50 minutes and I’m taking the liberty to skip that test.

I will actually need to update this post in the upcoming days as I don’t have an empty spare SATA drive handy right this minute. 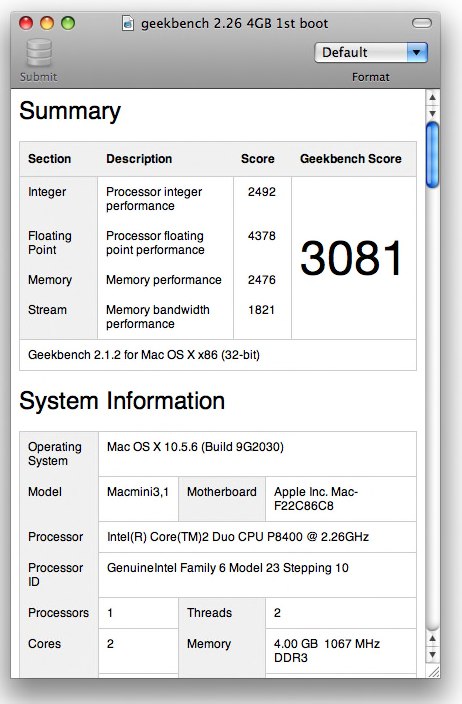 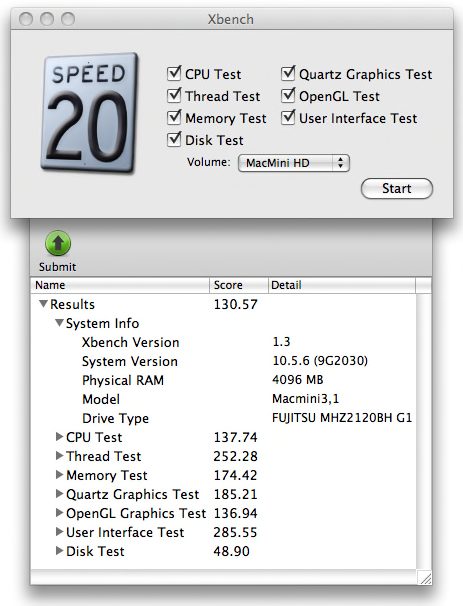 Boot times seem to edge out for USB2, but clearly connecting to the Maxtor via USB adversely affects the overall and hard drive score in Geekbench; where via FireWire it keeps up with the internal hard drive.

Clearly this drive performs less well than the Maxtor.

Temperature was not an issue. During testing the CPU temperature would rise from 50C to 63C and I noted a max of 71C at one point, but the fan(s) remained within plus or minus 5 rpm of 1500rpm and quiet.

The internal hard drive was near silent. Its temperature rose from 46C to 52C. Now sits idle at 42C with an ambient temperature of 65F.