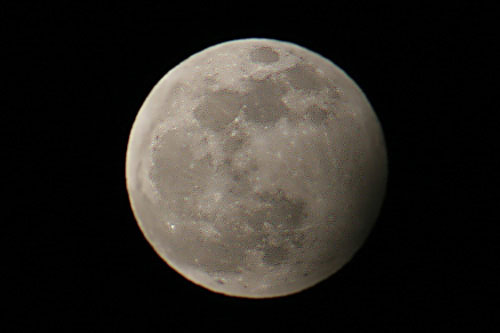 Did you see the moon rise above the horizon this evening? Notice anything different? Earth’s shadow cast a shadow on the lower part of the moon, and fortunately the weather cooperated tonight with a mostly clear sky. Here is a capture: Canon EOS 20D w 400mm lens (640 effective)

If you were waiting for Nikon’s update to the popular D70, you may be disappointed. Many, me included (especially after the 8MP digital Rebel XT), anticipated Nikon would go head to head with Canon with an 8MP D80 or something along that line. Well, Steve’s Digicams early yesterday morning reported Nikon’s announcements. The Nikon D70s remains at 6 MP but sports a 2″ LCD and raises the bar with many enhancements (better autofocus, more frames per second, faster flash sync, …). Price= $899 body & $1199 kit with 18-70 lens.The brand new Nikon D50, also with 2″ screen, will be a more affordable (prices have not been announced yet) and compacter 6MP dSLR. Specs wise it doesn’t offer some of the high-end features and one could say it’s a down-featured D70 in a smaller package. One surprise in the details: it uses SD memory cards rather than Compact Flash. DPreview has the first in depth article. For a detailed comparison between the D70, D70s & D50 check out this comparison table by DPReview. Good news for D70 owners is that Nikon will release a D70 firmware update to give it the improved auto-focus, menu system and add in-camera setup for PictBridge from the D70s. (Link from Steve’s Digicams) Nikon also announced two new dSLR lenses: AF-S DX Zoom-Nikkor 18-55 and 55-200. A pretty sweet lens set that’ll take you all the way from 27 to 300mm. No word yet from Canon on an EF-S lens covering that 55-200mm range or even better: an EF-S 55-300mm IS USM. Current dSLR lenses remain the EF-S 10-22mm; EF-S 17-85mm and EF-S 60mm Macro. Rebates. If you are in the market for something Canon, there’s a new Cash in With Canon promotion offering rebates of $100 on EOS 20D, $500 on EOS 1D MarkII and up to $50 on lenses and flash accessories. Other promotions can be found here. 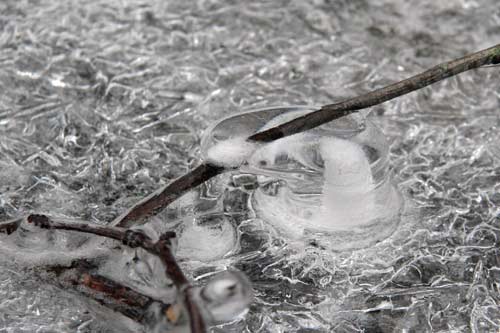 After photographing some ice formations you have to warm up by the fire and get hypnotized by the flames.

The more I read, the more I get confused. After the Canon G5 – which was a really poor performer – my mind is set for dSLR. Quite a bit more expensive, but that’s a given.The new Nikon D70 Outfit has really sparked my interest. Nice price-point with decent lens, instant boot, high burst rate. But, it’s Nikon, while I’ve got quite a bit of Canon “glass”. Nothing stellar, but good performers with nice 35mm results as far as I can tell. So, (and you knew this was coming by now) Canon dSLR? The Canon 300D / Digital Rebel is too light for my taste and the Canon 10D seems a lot better, but it’s also more expensive without lens, slow boot, slower burst rate, and a 2 year old camera. With high-end point and shoot cameras now all featuring 8MP, the dSLRs should follow shortly, likely around PhotoKina (Sep 28 – Oct 4)? But, I don’t want to wait that long as likely new models won’t ship immediately in quantity. Back to square one. […] Professional & personal reviews? Generally they’re both scoring very high. Generally. No camera is perfect. Lenses. They always say lenses are most important. I’m not really attached to the lenses & flash I have, though they perform pretty well and would provide a nice starting point. Lens reviews are something to turn you mad. So much details, partial reviews, opinions andany lens basically exists for any model camera (more or less).This may be the most important thing, if all else is equal: Hand fit. Which fits best? The D70 is a bit smaller, 10D is bigger. Likely I’d be better with the grip of the 10D, but I would really have to use them to know. What I need is a 24hr test drive for both models. Let me pick up one or both cameras. I’ll familiarize myself, take some photos, review them, sleep the night, take some more the next morning, compare and then make an informed decision. Maybe I still wouldn’t be able to decide, but at least I’ll be very familiar with both. I could order the D70 under satisfaction guarantee, and trade in for a 10D if I don’t like it, but that still doesn’t give you access to them side by side … Decisions, decisions, decisions. I’ll just have to bite the bullet.