Home Another day Dashboard vs. Konfabulator

icerabbit June 30, 2004 June 30, 2004Another day
The developer community and especially the Konfabulator
developers are not thrilled the way Apple went about implementing Widgets &
Dashboard into Tiger. MacCentral/MacWorld article. 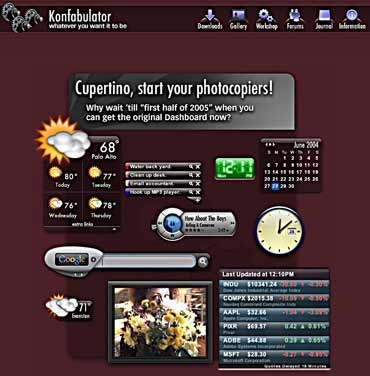 Analog
to Apple’s “Redmond, start your photocopiers” & “Redmond, we have a problem”
ad banners at the WWDC

Unfortunately, it doesn’t make the future for
Konfabulator any brighter. While it is true that similar things have happened to
the software market in the past with built-in media players & in-house
browsers. I just think that the case of Konfabulator with it’s Widgets, is
different.

MS has such a market share that MediaPlayer & MSN
Messenger are everywhere, but people still hold on to ICQ, Yahoo and others.
When Apple bundles (an IMO half finished) iPhoto with their OS, that doesn’t
bring graphics software development to it’s knees. iPhoto fills an elementary
market. Karelia further improved Watson after Sherlock came
about.

With Dashboard, I don’t think there’s any breathing
room left. While individual scriptlets, applets & remotes have been around;
Konfabulator was a unique first-off app that really maximized the possibilities.

Dashboard is basically a Xerox copy as far as anybody can tell. Similar
technology with similar scripts that do exactly the same thing. Same idea: a few
starter widgets and anybody can build more. The only difference right now seems
to be that dashboard is an Expose feature to show all widgets at once or none at
all.

Apple, which always says their success builds on the work of
all the OS X developers, should have gone a different route IMO. Contact the
Konfabulator people. See what they can agree on. Buy the technology, license it,
… work something out. You don’t say one thing on in public and in the mean
time rob developers of their child, income and future.

Hopefully
Konfabulator can code away before 10.4 is released in 6-9-12 months from now.
One advantage for Konfabulator is that it remains compatible with older 10.x
versions where Dashboard will be a 10.4 exclusive, using brand new web-core
technology. And, on the positive side it brings more attention to Konfabulator,
but whether ultimately Dashboard is a good thing for Konfabulator remains to be
seen.

Edit: For an in-depth look at Dashboard vs. Konfabulator,
including the different technologies used and things that preceded widgets, have
a look at: John Gruber’s Daring Fireball.