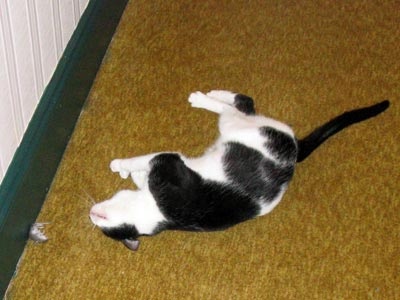 Locked in on the target. Both playing dead? Hypnotizing to unveil
secret information?

(please ignore the antique carpet & the
green trim in the hall way – it’s not mine! I swear! LOL)

I hope she
reads “it” it’s rights! ;-) Anyway. Seven caught her 2nd(*) mouse. We suspected
mouse activity upon moving in, and found some new “evidence” the other week, so,
recently we’ve let the cats roam the house at night. Every night, Seven, who has
a super sense of smell (she even smells deep frozen shrimp!), has parked herself
in the kitchen on the floor or on a cabinet, for hours. Last night, shortly
after I noticed she was sitting on the countertop again, I was thinking about
the “no cats on any furniture rule”, but then she’s hunting, right? So, I let
her be … and 20 minutes later she’s there with a mouse! Seven: 2* – Mice: 0
You go, girl!

* Something went on Saturday night where she &
Wizard disturbed the nightly peace and we’re pretty sure she caught something,
and either it got away or Wizard wanted in on it.