Home Another day iMac and .mac 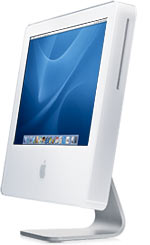 If
you are less in tune with news about Apple (or were stuck somewhere without
electricity and/or web access); they released the iMac G5 last
month.

It sports a 1.6 – 1.8 GHz G5 CPU along with faster bus
speeds & RAM and a 80 – 160 GB Serial ATA hard drive. The 17″ & 20″
panels as well as the graphics card (NVidia GeForce FX 5200) remain the same.
All the hardware that used to be housed in the iMac G4’s dome, moved to the back
plane of the LCD – which many (including me) thought was the only possible
option for a next generation iMac.

While I haven’t seen one in
person (CompUSA didn’t even have Alu Displays and G5 DP 2.5’s on my last visit),
I think this is a very stylish and compact home computer. It’s like a G4 Cube
with the Cube & speakers built-in the display, so I could see myself use one
for email, web, … Pick up a wireless keyboard and mouse and you practically
have no computer clutter. This is also one of the most easy to upgrade machines
ever built. Remove three screws and you can lift the back cover off to upgrade
RAM, hard drive, … A G5 CPU requires a lot of cooling, so hopefully the fans
are whisper quiet if Apple hopes for Cube owners to upgrade (who tend to be very
space conscious & adamant on quiet operation). Actual speed? A recent
MacWorld bench test puts it at 35% faster than the G4 1.25 GHz
iMac.

Unfortunately Apple is still holding onto the standard 256MB
RAM. Sure they can equip a base model with 256 RAM and a combo-drive to lower
the price point towards educational purchasers, but the mid range & top
model? For how long now is the unwritten standard 512MB RAM? OS X & iLife
require 256 MB minimum and work a lot better with 512MB RAM. Built-in wireless
(airport & bluetooth) would have been nice as well, analog to the PowerBook
line. Other than that, it looks to be a winner.

.Mac users finally saw a considerable upgrade to
their service. Timing couldn’t have been more crucial with many, if not most,
renewals due in October. Now iDisk sizes went up from 100MB to 250MB and the
email size limit is 10MB; Apple satisfied the likely #1&2 complaint that
there simply wasn’t enough space nor headroom for larger emails. The price for
1GB iDisk storage dropped to 49.95/year. You can now also use disposable email
aliases and members are offered a free year subscription to VersionTracker Plus.

“Refer a friend” still works backwards, IMO, as .Mac users still
need to email potential users to introduce them to .mac. I prefer the homepage
button and a form field when the new customer signs up, that asks if somebody
referred them.