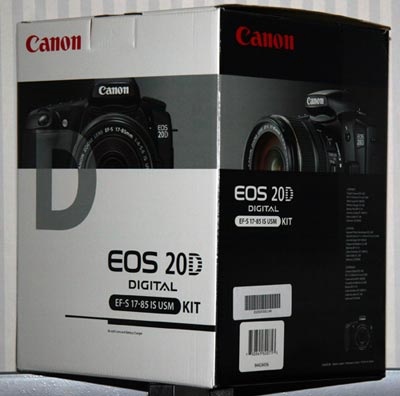 The Canon EOS 20D and EF-S 17-85 IS USM are available as a kit,
similar to the kit with the 17-55 EF-S lens already sold with the Canon EOS Digital Rebel a.k.a. 300D, with the
difference that this lens is quite a bit superior (and pricier). Inside the
larger box you find the standard boxes for the camera and the lens atop one
another. No surprises in either. The camera comes with a neck strap, battery,
battery charger, AV cable, USB cable, manuals and software. The lens comes with
the regular caps. One detail is that with an EF-S lens you line-up the white dot
on the lens with the white reference mark on the 20D’s body, which is slightly
to the right of the red mark at the top for standard AF lenses. The combination
does weigh quite a bit. It compares to my older Canon EOS 650 with 70-210 EF
telephoto, which is noticeably heavier than with a 35-70 EF standard zoom.

Why the 20D? A little history.
After extensive shooting with my
EOS 650s and using Carolyn’s two Casio QV series digital cameras a lot; I
finally went digital with a Canon Powershot A70. I had a flat out
negative experience upgrading to a Canon Powershot G5 and not much later
the Powershot Pro1 appeared to have similar ills. The Digital Rebel
seemed a little on the light side and I didn’t like the lens(es), so time moved
on. With the 10D on the market for a while already and heated competition
from Nikon, the 10D wasn’t the right buy. The Nikon D70 was tempting, but
it would be incompatible with my other Canon gear. Disliking Sony, I feared the
Powershot G6 would just be more of the same G5
& Pro1. The recently purchased a Minolta Dimage A2, a very feature
rich camera, only gave soft images and the buttons littered all over the place
also made it hard and confusing to operate. Especially without daylight. Enter
the 20D and a dSLR is back in my view. Two major downsides: it’s not a
pocketable setup (back to the camera bag days) and with the 1.6x magnification
factor I need a 20mm or so lens to get any kind of landscape images. Other than
that, it has the right freshly updated features. Click the following link for a detailed 10D vs 20D comparison

What
lens?
Not the 18-55 EF-S. As good as that lens may be, to me it is a
piece of plastic I’d rather not touch. The build quality pales to my trusted EF
35-70 & 70-210. Mounting it on a 20D would be like putting a “deux chevaux”
engine in a German car body. The 17-85 IS USM is one of two new lenses
(the other being the ultra wide zoom EF-S 10-22 USM) Canon introduced for
the 20D & digital Rebel lineup. EFS lenses mount deeper into the camera body
and cannot be used with other cameras and dSLRs. They use aspheric elements to
optimize image quality for dSLRs and the ring-type USM motor for fast and quiet
autofocus. The IS stands for Image Stabilization. Perhaps a luxury on a 17-85mm,
which translates * to 27-136mm on a conventional 35mm camera, but it should
allow for handheld shots at slower shutter speeds and compensate a little for
the f4-5.6.

* (most digital SLRs have a 1.3 to 1.6 x magnification
because they use a sensor that is smaller than a 35mm film negative)

More important than why & what: How does it work? What is the
performance? And, where are the pictures? ;)

The 20D has a
comfortable hand grip with a lot of space to rest your right thumb. Boot-up is
near instant. No 2-3 second delay here. It’s a slight adjustment to shoot
viewfinder only after several years of on screen shooting with a digital
compact, but the view is good & clear ;) and fortunately my nose fits just
to the left of the menu and other buttons. The controls are where you’d expect
them for an EOS camera (drive, ISO, white balance, … on top plane, not in a
menu). Auto-focus is fast with small bright red squares indicating the focus
points, which are in an eye shaped pattern btw. The shutter doesn’t seem loud
nor too loud (contrary to some reviewers’ opinions) even though I too have been
spoiled by stealthy compact digicams. Interior shots with flash have been fast
& good. 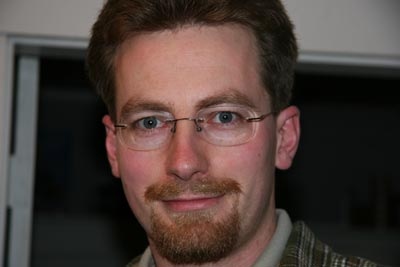 Somebody is happy with their new camera rig! 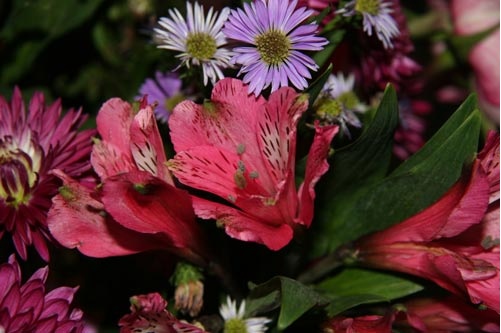 Singing
a song on the mantel. 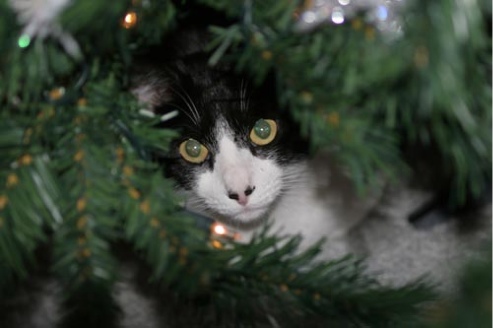 Manual
focus point on Seven under the Christmas tree. 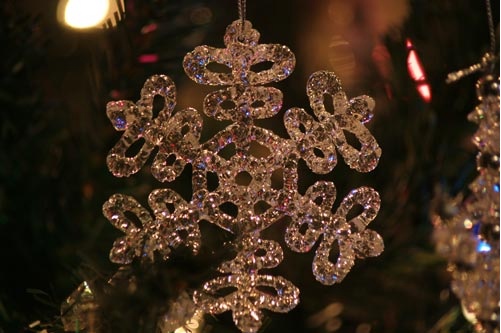 Let’s head outside. I took advantage of
lunch time on Friday for a few quick general outdoor shots in the park. All
shots posted here were tripod mounted and shot with the auto setting. The 17-85
lens did have the UV & Polorazing filter on. 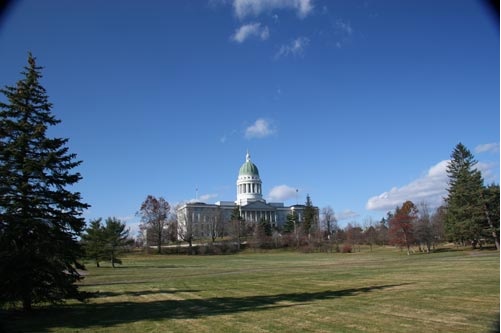 Back home I noted the black corners? What?
Turns out the UV &
polarizing filter combo obstruct the edge view just a bit.
I’ll retest
without and with each filter separately to see who’s the evil one or if the lens
can’t shoot at 17mm with any filter? 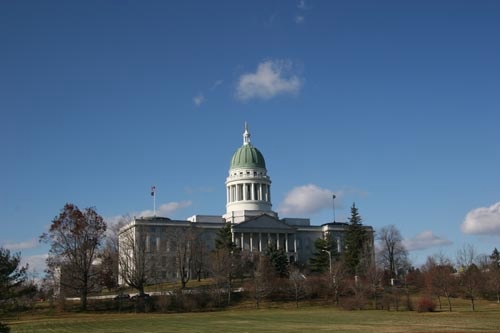 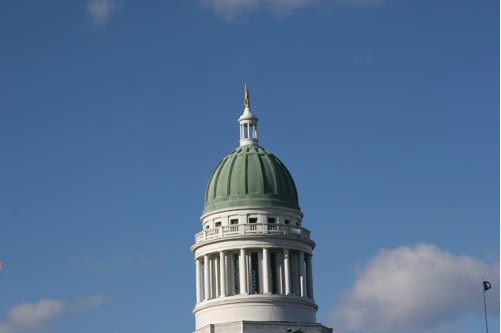 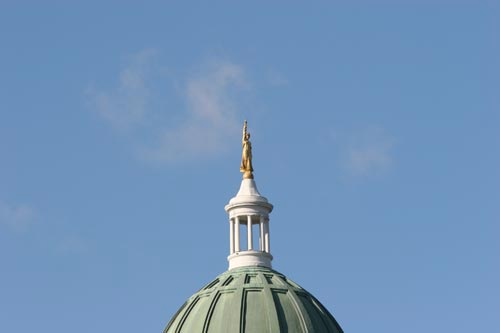 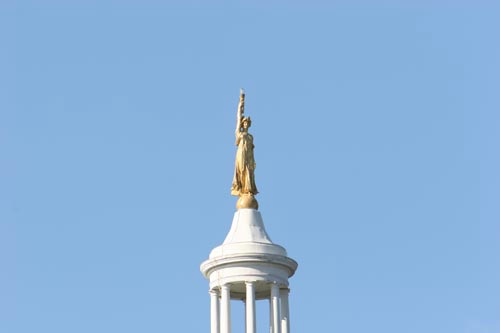 This starts to get really tricky. 640mm is more than anything I’ve ever
used.

There’s a hint of purple along the left side. Symptom of a common lens on
a dSLR?
Using automatic mode it fired at 1/500s F11 iso200.

A
second shot * closer to the capitol (to see just how big of a close-up I could
get), it seems less pronounced, but I had stopped down a little to minimize
white-out on the gold and it fired at 1/400s F8 iso100:

* Any fuzziness can be blamed on the cameraman. At 640mm I should
have used mirror lockup & timed shooting, but I only had time for a quick
test run in automatic mode.

I’ll post more observations &
results in the near future when I have some extra shots. You can be certain I’ll
focus on sharpness at actual size and any purple fringing / chromatic
aberration. To be continued :)