icerabbit December 17, 2004 December 17, 2004Another day
I drove over 3000 miles in the past two weeks, and, even though I’m not
all that much into music nowadays as I once was, while trying to find good radio
stations and juggling a few CDs, I thought: this would be easier if I had an
iPod.

I come home tired and all, … and there is this big stocking
stuffer! Wow? What’s all this?
An iPod! An iTrip ! And a PowerPod ! And noise canceling headphones? 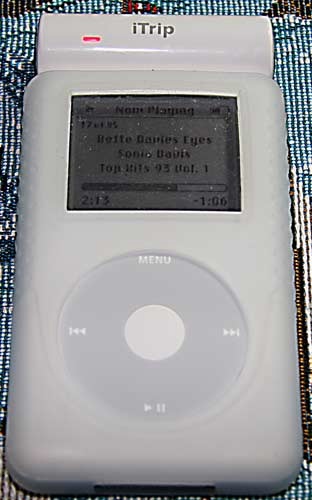 If that does not make you an instant teenager, I don’t know what does ;)

So, yes, you can now count me in. I’m an unexpected member of the
iPod owners family now too and a very proud owner of a 4th generation 20GB iPod.

I will admit that I found the iPod installation lacking a little of
the general intuitiveness that I’m used to. I plugged it in. My Mac said there
was new firmware. OK. Follow the steps. And, I just wait for the “do not
disconnect” to go off the screen. 10 min. 30 min. 1 hour. ??? Something is up
with this. Turns out that when I carefully said “No, don’t automatically update
my iTunes library to my iPod” – because it’s way too big to fit on there and I’d
rather have some manual control over what goes on there – it shows that by
default as you need to eject the iPod from the finder. Aaaaahhh!
RTFM?

On a related note I was unable to find the iPod in iTunes. “No
iPod connected”. Huh? It says it’s right there in the finder! Turns out that
choosing for the “non automatic updating” causes iTunes apparently not to see
the iPod by no means. No option for manual uploading. Nada. So, I “Reset” the
iPod to “Factory condition” and started over choosing a yes on automatic
updating this time. As by magic it appeared in iTunes and there were the iPod
preferences to update select playlist, do it manually etc. Some logical flaw in
Apple’s reasoning and programming, if you ask me. As, when you choose manual,
why aren’t there any manual options in iTunes? nor an option to change to some
automatic preferences?

So, after 2 hours (blushing) of less and less
patient (WINK) waiting staring at the “do not disconnect” iPod screen and then
the “no iPod connected” in iTunes runaround, I finally was able to upload some
songs and play around. Wooohooo. An iPod rocks!

I bought a silicone
protective skin tonight for this expensive forensic fingerprint catcher ;) It
catches fingerprints like nothing I’ve ever seen. Could be handy some day –
haha. Time to Pod around some more ;)