Yes, I’m a little tickled about Tiger, but I’m far more excited that
I’ve got 2.5 gigs of RAM and wiped my hard drive. Yes, two and a half gigs of
RAM! Where are the days we thought one would never need 2.5 megabytes of
storage, let alone memory? Time does fly. Fortunately memory prices have come
down since then, haha ;-)

Tiger is nothing unusual or unexpected. To
the common user it’s Panther with a few extra touches. All major feats. have
been covered for a while at conferences and in magazines. There are a few
things for everybody in the 200 new features. My personal favorites
are: Spotlight’s search speed and result presentation (though it already has
give me a few odd results where I was totally puzzled), smart folders, Automator
(still need to check it out), Dashboard and some small touches left and
right.

Here’s what I dislike (first impressions):

– No
speed improvement. It still takes 60 secs to boot on the now 2nd fastest Mac
ever. The desktop appears before the login window finishes, but my stopwatch
tells me there’s no speed gain.

– Styling: Mail 2 is Ugly with a
capital U. I like the fact that the drawer is gone but the colors &
buttons??? What were they thinking? 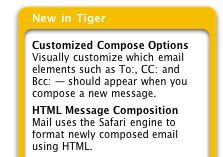 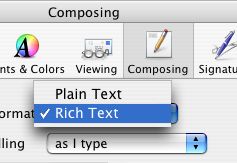 The composing options in Mail 2 only show Plain Text & Rich Text (= the way
it used to be). So where’s HTML composing? I don’t know. Couldn’t find it.

– new Apple & spotlight logos in the menu are not aqua-fied, the
blue Apple in particular is a big eyesore

– Finder still is as stupid
as OS X, X.1 etc
— it still can’t auto-arrange all icons or items and
properly align them into the window. You still have to keep resizing windows for
folders & drives left & right out of view, even though the window is
more than big enough to show them all
— cut / copy / paste still not
implemented
— still no maximizing (only zoom between 2 states)

– I like Dashboard – how do you get
rid of an extra instance of a widget? There also is no preference panel. Upd.: I
overlooked the + / x sign in the left bottom.

– Safari 2 is faster
(analog to 1.3), but I rather keep the RSS for a separate application. Big
annoyance: with every download it asks a confirmation, prompting that the
download could contain an application. Big deal. Sadly enough. No preference or
option to turn the behavior off?

– iSync/iCal. It can’t import my
Panther calendars from .mac. For some obscure reason it errors with some
incompatibility or unexpected something. Still no syncing between machines
without using .mac.

I haven’t played around with networking or
external drives yet. There should be improvements (again), so I’m hoping this
time it’s really become a usable situation, as Panther gives me grey hair when
it … acts blind :-)

Oh, my iPod’s music is wiped?! There’s no
music left on it. Is it because I left it plugged in during the installation? I
don’t know. iTunes 4.8? My backup files are still there though, and that’s the
most important thing! Still odd. Maybe I wiped my iPod music library in my
sleep?